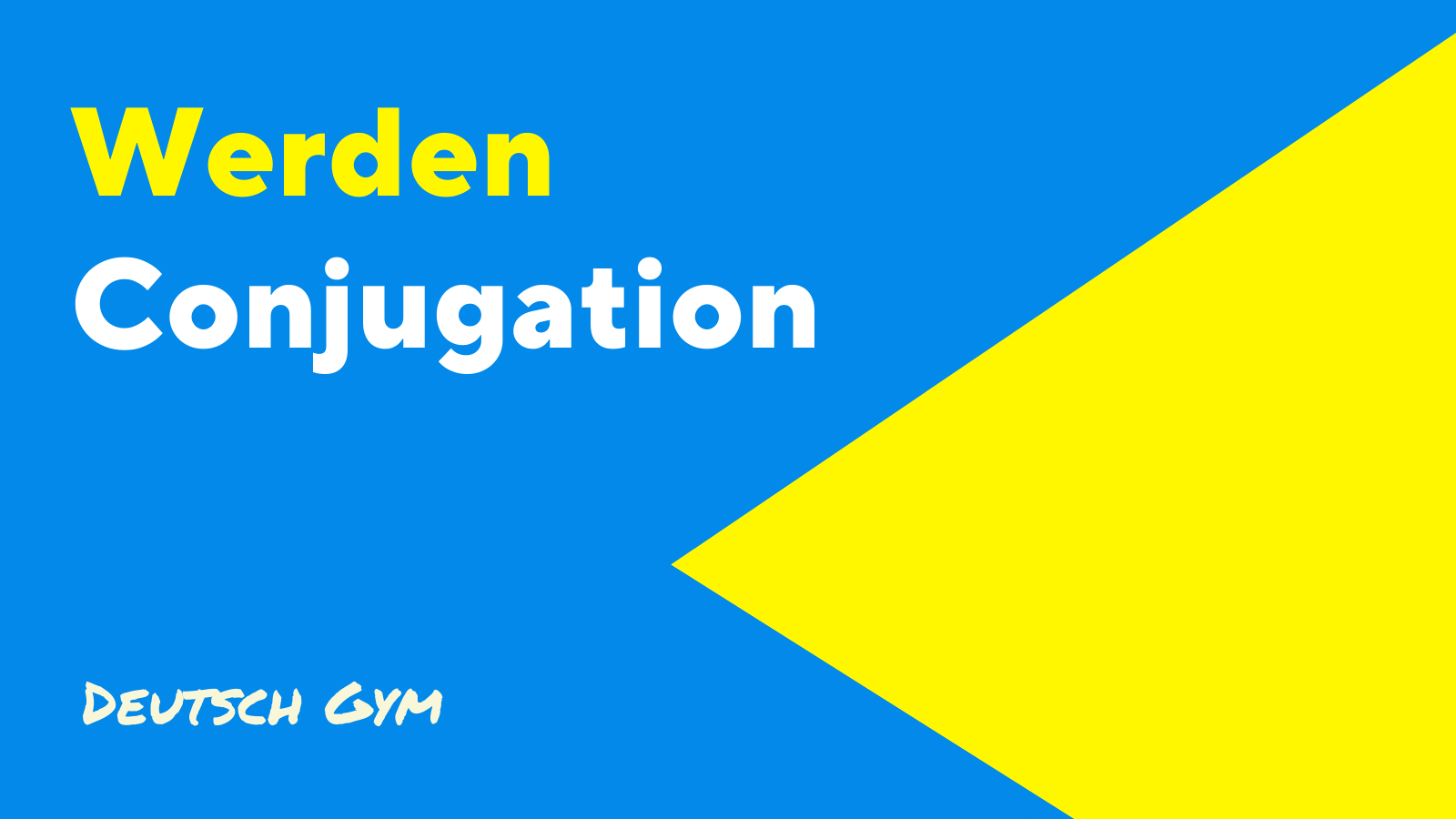 Conjugation of Werden - ‘to become’ - German

The verb werden is a multi-use verb, which means “to become” and “to get” (as in ‘to get older’) and “to end up” and “shall” and “will”. All sorts of words in English which describe a change into the future can be translated into “werden.”

It is also an irregular verb. This means that it doesn’t follow the rules for making a verb present tense.

As with all irregular verbs, it’s most helpful to just memorise the different conjugations of ‘werden.’

As you’ll remember from our article on the verb sein,‘conjugations’ are the different forms of the verb to put them into a tense.

* This Sie (the formal ‘you’) requires a capital letter.

Let’s look at how we pronounce some of these words.

(For some tips on pronouncing the pronouns, such as ‘ich’ and ‘du’ please check out our article on the conjugation of sein.)

A German ‘w’ is usually pronounced like an English ‘v’ as in ‘vine.’

an -er together is pronounced as in the English word ‘air’

The most common use of ‘werden’ in the present tense is to make the future tense. ‘I am going to do something.’

You do this by using the present tense of ‘werden’ and combining it with the infinitive of another verb, which goes to the end of your clause.

Ich werde Federball spielen. I am going to play badminton.

Du wirst ‘Die Verwandlung’ lesen. You are going to read ‘The Metamorphosis.’

Er wird Musik hören. He is going to listen to music.

Wir werden dich vermissen. We are going to miss you.

Ihr werdet Mutter und Vater sein. You are going to be mother and father.

Sie werden Pizza essen. They are going to eat pizza.

Sie werden Tee trinken. You are going to drink tea.

The imperfect tense is used far more often in writing than in speaking. Documents, novels and reports are all (usually) written in the imperfect tense. It is used to describe single, specific events that happened in the past.

The perfect tense is the version of the past that we use most often in speaking, and is the default past tense used in letters and emails. It is specifically used to describe something that you did, but have done often and will probably do again.

If in doubt between the imperfect and perfect tenses, use the perfect. It is far more common in German and will sound less strange if you’ve chosen the wrong one.

Notice that all of these conjugations are actually the present tense of ‘sein’ and then the past participle ‘gewesen’ (which stays the same for every person.) That makes this quite easy to remember.

In the translations above, we have worked with the English ‘have/has been’ to help you remember the difference between Perfekt and Imperfekt. However, you can also use ‘was’ to translate the Imperfekt into English. Use whichever translation seems most natural.

In these examples, we have put the adjective in the middle of the ‘bin geworden’ phrase. This is because a German past participle always comes at the end of the clause.

Notice that all of these conjugations use the imperfect tense of ‘sein’ and then the past participle 'geworden.’

The pluperfect is used to describe an event that happened before another event in the past. It’s one step further back in time than the perfect and imperfect tenses. An example in English would be:

I had studied (pluperfect) German for three years before I moved (perfect) to Switzerland.

The German ‘Futur II’ combines all the forms of ‘werden’ we’ve looked at so far. While that can make it intimidating to use at first (because it feels like there’s a lot to remember) it also makes it one of the easiest tenses to remember, because we’ve already learned the different parts.

We use the future perfect to describe an action that will have been completed some time in the future. German always uses a time expression when using the future tense in this way. An example of this in English might be:

I will have studied German for three years, before I move to Switzerland.

Ich werde witzig geworden sein. I will have become witty.

Du wirst sportlich geworden sein. You will have become sporty.

Er wird freundlich geworden sein. He will have become friendly.

Sie wird begabt geworden sein. She will have become talented.

Es wird gierig geworden sein. It will have become greedy.

Wir werden klug geworden sein. We will have become smart.

Ihr werdet gesprächig geworden sein. You will have become chatty.

Sie werden faul geworden sein. They will have become lazy.

Sie werden froh geworden sein. You will have become happy.

And those are all six conjugations of the verb ‘werden’ and as a bonus, you learned the rules for forming the future tense. So as you explore our catalogue of verb conjugation articles, keep an eye on the Futur I forms, which will help you revise the present tense of werden.

‍
Use the grammar you have learned in our online German meetups (7-day free trial) or try our online intensive courses from A2-C1 and business German.

Unlocking Life in the UK by Learning English with Daniela

Embracing Responsibility and Treating Patients Through German with Ece