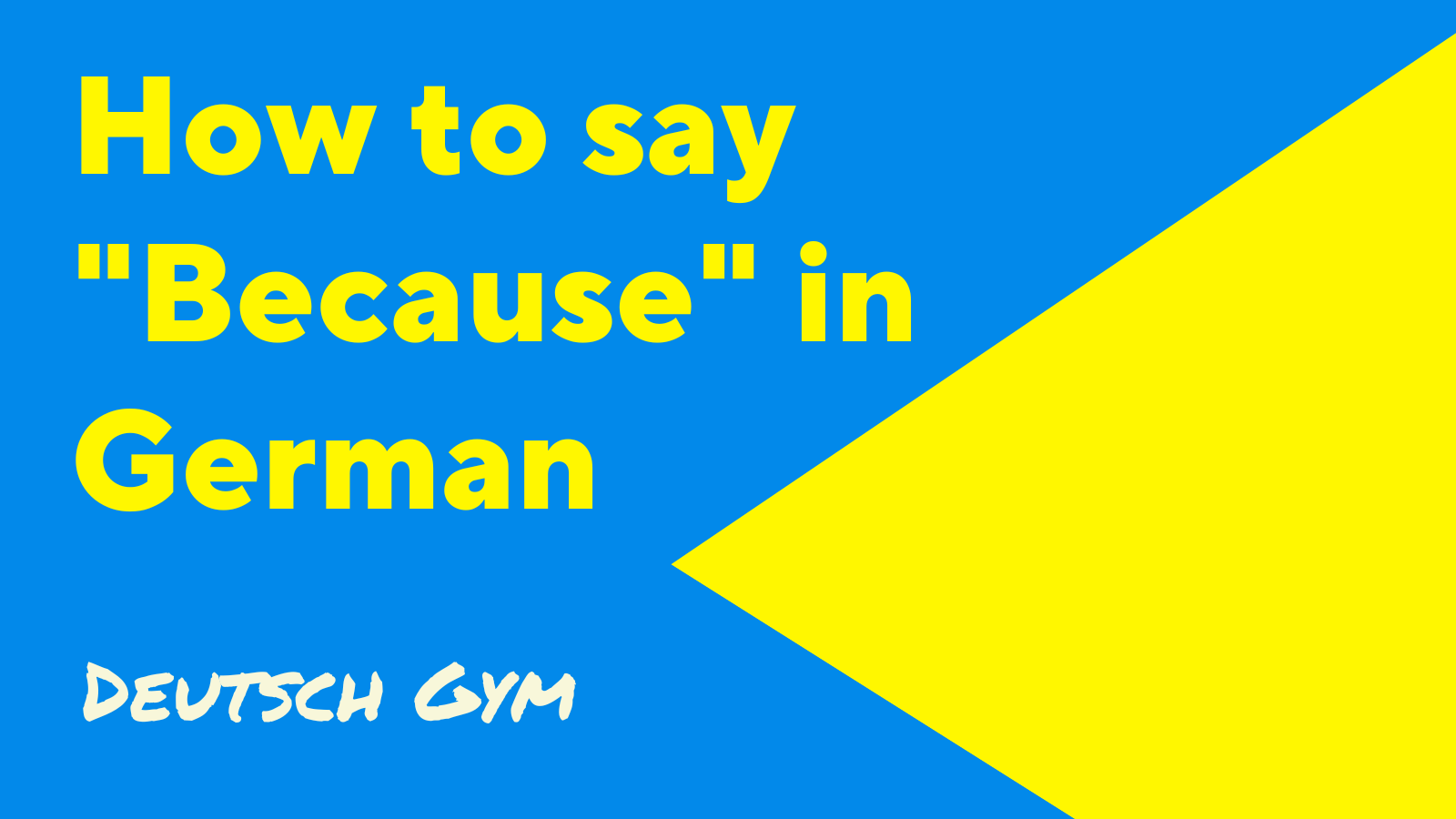 “Would you like to go to the cinema this evening?”

We have all been in a situation where we’ve had to explain our reasoning for our decisions or actions.

In English, we have multiple ways to do this - ‘because’, ‘as’ and ‘since’ are just a few.

German also has multiple ways to say ‘because’ and help you to explain yourself.

This article will explore a few of them, because it’s really important to make yourself understood.

Weil  (pronounced like the English word ‘vile’) is the most common word for ‘because’ but it’s also the most complex.

Weil triggers a subordinate clause. This means that the verb in the clause that comes after weil needs to go to the end.

In all three of the examples above, the verbs in the second clause (bin, macht, ist) come at the end of that clause.

Just like in English, you can switch your sentence around and begin with your weil clause.

“Because I am thirsty, I am drinking coffee.”

However, if you do this you also have to switch the order of the words in your other clause, so that your verb comes at the beginning of that clause. This means your two verbs sit next to each other in the sentence.

Da (pronounced ‘dah’ as in the first syllable of ‘dharma’) is a synonym for weil.

Like weil it sends the verb to the end of the second clause.

As with weil, we can use da at the beginning of our sentence.

Again, as with weil, doing this means your verb second verb comes at the beginning of the second clause. This means your two verbs sit next to each other in the sentence.

Denn (pronounced like the English word ‘den’) is a word for ‘because’ that is mostly used in writing.

Denn does not change the word order, so you keep your verb in second position.

While denn and weil are close synonyms, denn doesn’t imply cause-and-effect as much as weil does.

Here are the two ways we might express ‘It has been raining, because the street is wet':

The first sentence, with denn, offers an explanation rather than a cause. ‘(I know) it has been raining, because the street is wet.’

The second sentence, with weil, doesn’t make sense because it implies the wet street is the cause of the rain.

It’s a subtle, but important distinction. And a distinction native speakers don’t always consciously realise, but will adjust to accordingly.

(The distinction is so subtle that many linguistics papers have been published to investigate it. The wet street example comes from one of the best known, published in 2005 by Tatjana Scheffler.)

This means that you can use denn in almost every situation, but you can’t always use weil.

We also generally can’t begin a sentence with denn.

Deswegen (pronounced as ‘dess-vaygun’) is a ‘because’ in the sense of ‘this is why’ or ‘therefore.’ You might think of it as ‘because of this.’

When you use deswegen, your verb comes immediately after.

I am thirsty. Because of this, I’m drinking coffee.

It’s fun. Because of this, I play tennis.

German is easy. Because of this, I like German.

Notice that in both English and German, our two clauses are split into two separate sentences.

As a bonus, you can use deshalb (pronounced as ‘dess-halb’) as a synonym for deswegen.

I am thirsty. Because of this, I’m drinking

It’s fun. Because of this, I play tennis.

German is easy. Because of this, I like German.

If you’re in a bad mood and don’t really want to answer a question, in English you can just say ‘Because!’

Why are you so moody?

In German, we use darum (to rhyme with the question warum?)

In addition, you can use einfach so to mean ‘just because!’

Why are you so moody?

There are two things to note here:

1 - These are very colloquial terms, so they aren’t words you’ll use in polite company, or even general conversation. They are used to make a point about how annoyed you are.

2 - They don’t mean ‘because’ in the same way as weil and the others, so don’t use them in that way.

Now you have multiple ways to give reasons for your thoughts, feelings and actions as well as two ways to avoid giving your reasons. This will make your German sound a lot more natural than Tarzan-style “I am thirsty. I am drinking coffee.”

Why not practice your weil, denn, and deswegen in our online German meetups (7-day free trial) or try our online intensive Business German course.

How to Say Sorry in German

From Siberia to Heinrich Heine's House with Daria