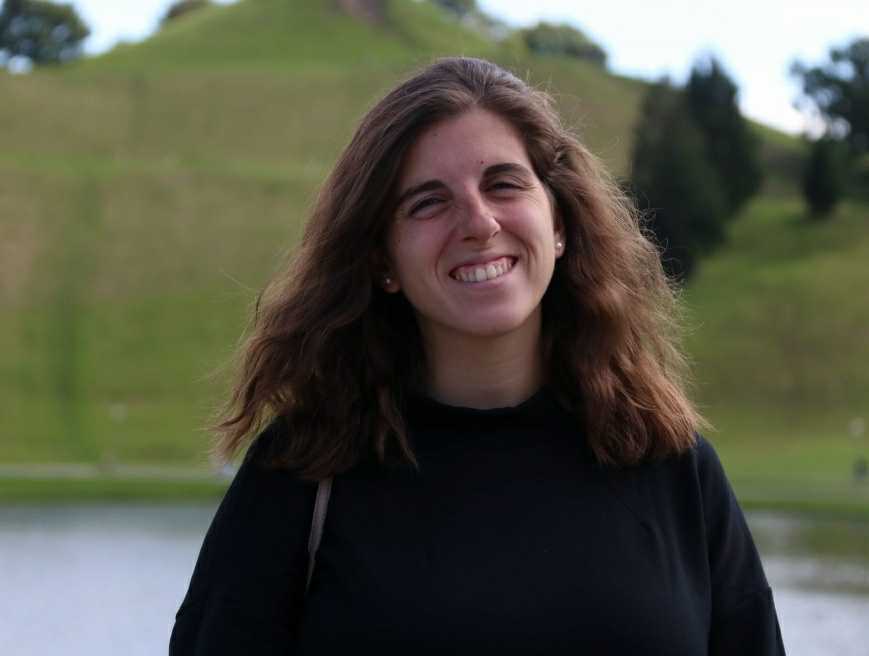 This is an interview with Catarina, a member of our B2 group.

Try a free trial of our meetups today.

‍Tell us a bit about yourself Catarina!

I'm from Portugal and I have been living in Berlin for the past 3 years. I moved to Berlin for work and immediately got sucked into the city - Berlin is so great!

As soon as I got to Berlin, I wanted to start learning German even though it's pretty easy to live in Berlin without it. I feel like people appreciate it if you make an effort to learn German. Plus it perhaps can be beneficial and open some more doors job wise in the long-term, so learning German was always something I had in my mind. It also opens many doors to be able to understand what is going on around you.

On top of that, learning a new language is always an interesting thing to do in general!

Did you move to Germany to improve your speaking skills?

I did not move to Germany specifically to learn German. Moving was my trigger to start learning German.

While in Germany, you are surrounded by the language, which also helps the learning process. I try my best to use the language whenever I can -  at the restaurant, supermarket, shops, etc. This helps a lot in improving.

But most of the time it is not easy, I’m not going to lie.

At first, people don't understand you. Then, when your ability has improved a bit they start to converse with you in German. But eventually they ask you something you don’t understand. And then the conversation is over. So it's a struggle for the most part but the more you try the better you get, that is a fact!

Yes and no. It's really easy to integrate in Berlin as a whole because it is a really international city and has a lot of expats. I find it fairly easy to make friends with expats.

What also helps is that there is so much to do in English, between international music, cafes, English comedy clubs, and expat groups of all kinds (book clubs, hike clubs, sport clubs, anything you can imagine!).

What is really hard is integrating with actual Germans - it is tough in my opinion. Unless you are surrounded by them at work (which most expats aren't as they work for international companies with English as the work language) it is hard to make friends with Germans. They unconsciously (or not, not sure) prefer being friends with other Germans so that they do not have to speak English. Knowing even just a bit of the language has definitely made it easier, as people appreciate when you try to speak even if not always 100% correctly.

Also, I think in Germany, they generally find it rude if foreigners/expats do not even try to make an effort to learn the language. A lot of the time they won't even speak English to you (this is especially true in other German cities that are not Berlin or Munich). So the more German you know, the easier your life gets overall.

The German language has many challenges for foreigners. The challenges you will face really depends on what other languages you speak or 'come from'.

For me, the hardest thing about it is learning the grammar and the vocabulary simultaneously whilst having confidence speaking.

When you learn the basics of grammar you start feeling like you can form sentences and speak a bit. This is great, but then you realise you lack the vocabulary, and that completely smashes your confidence! As all you can talk about are the topics you learn in class (where you come from, what you do in your free time, etc) which is mostly inadequate for real life. That is what I find the hardest.

Note from Rónán: the #1 bit of feedback people say about Deutsch Gym is that it gives them confidence to speak German. Try a free trial today.

How has Deutsch Gym helped you in your language learning journey?

Deutsch Gym has helped me with confidence for sure, as well as my vocabulary and of course with practising my spoken German. I love the fact that there are so many random conversation topics in the Discord groups during the week to talk about, you learn lots of words unconsciously. Also, the fact that you are just talking on the platform also allows me to have the translator open so that I can look up the words if I don't know how to say X or Y during the conversation. I think that is really helpful!

Also, there is no judgement on anyone's part and you are almost always talking with people on a similar level as you, so everyone can relate to the struggles together.

What other learning methods have you tried? What worked well?

I did evening classes for 1 year straight twice a week for 3 hours each. It was intense but effective. I concluded the B1 level (in theory) but still felt like I lacked vocabulary and felt like I could barely say anything. Then I only found Deutsch Gym a few months later and that is when I started practising more often.

I wish I had started with practising speaking earlier than I did. I did classes for one year but still felt like my speaking was too weak at the end of that year, so I think I would combine the classes with the speaking from the very beginning.

Other language learners will be reading this blog. What tips do you have for them in learning languages?

The best advice I could give is not to give up! When I started German I always thought I would never ever in my dreams be able to understand a word of this language, it was so hard, it all sounded so weird to me.

But everyone told me that I would eventually start to understand some of it and I did. So I think the most important thing is to keep at it, not give up and keep making an effort.

Improvements come slowly but they come. The more work you put into it, the better your results will be but also remember not to overwhelm yourself. Also, make use of the endless resources that exist: podcasts, Netflix with subtitles, books and meetups to practice German. Learning a language is not like riding a bike, in that it is tough the first few times, but then you get it. It is more of a long-term learning process, more like training for a marathon where you have to put in work over a long period in order to achieve your goal. You got this!

Do you have any book/podcast recommendations that have helped you with your language learning?

The best podcast I found and the one that helped me the most is called Coffee Break German and it is so so so useful! The episodes are short, they start from scratch and are super well explained and interesting. I listened to one episode a day and it definitively sped up my learning process. Something else I did was to watch silly children's shows on Netflix (like Peppa Pig) in German with subtitles. And Deutsch Gym for sure! Find out what works best for you!

I think it was when a few of my friends decided to give me a ticket to the College Weekend because I could not afford it, so they managed to put together 80 people from our college class that knew me and liked me and everyone donated €1. I was shocked, like how could so many people be so kind and do that for me? My heart still melts thinking about this.

Curious about Deutsch Gym? We offer a 7-day free trial. Come along to a meetup today.‍